How to Grow Leeks in Your Fall Garden

How to Grow Leeks in Your Fall Garden

If you’ve never had the pleasure of enjoying a hearty potato soup with leeks, you’re missing out on one of the best tasting meals that can be completely grown in your garden! This tall, tasty allium is an excellent ingredient for many fall and winter dishes – and also happens to grow best in cool weather. A friend and companion to other fall crops, the leek becomes an even more valuable addition to any annual garden. If you’re beginning to plan your fall garden now, be sure to put leeks on the list, you won’t regret it!

Leeks require from 90 to 120 days to fully mature and prefer to grow in the cool seasons. For those in zone 6 or cooler, you should be planting leeks in early spring when the ground first becomes workable. For those in zones 7 and up, fall is the best time to plant, as the cooler evenings will aid in the leek’s development of its flavor profile. While they do love cool weather, leeks also need sun to grow their best.

This is also a plant that is hungry for nitrogen, so be sure to amend your soil prior to planting with a nitrogen rich compost and/or organic fertilizer. If you’ll be planting your leeks in the same garden that you used during the spring/summer growing season, try to plant in the same section that previously grew beans or peas. These legumes are nitrogen-fixing plants, meaning they’ve created a “stockpile” of nitrogen in the soil while they grew. Your leeks should see a great boost in growth if you’re able to take advantage of this growing “secret.”

Leeks can be sowed indoors prior to planting and do best at a spacing of six-inch intervals. Plant the seeds between a 1/4” to 1/8” deep in the soil. If you want to retain the white stem, you’ll need to blanche, hiding the leek deeper in the soil, away from direct sunlight, by planting it 6-8 inches deep. This can be done after sprouting indoors, but will need to be trenched and backfilled as it grows past the trench line.

Leeks can be harvested at any time, but you’re better off waiting until they reach at least a 1” diameter. They are also one of the most cold-hardy vegetables you can grow in your garden, with a tolerance well down below freezing temperatures. It’s not uncommon for northern gardeners to allow their fall harvest of leeks to stay in the grow until the first snow fall, as the extreme cold has a positive effect on most allium-types, helping to bring out it’s robust flavors.

Like other alliums, Leeks are excellent companion plants. Their strong aroma is known to repel certain insects that can wreak havoc on other plants that also do well in the fall garden. One example would be strawberries, which also love growing in cool weather and happen to attract a number of insects, which can devastate your entire fall harvest once they take up residency in your garden. In fact, it’s common to see strawberry fields surrounded by the leek’s close relative, the onion. Centuries of wisdom at work.

While Leeks are friends to several other fall crops including beets, cabbage and lettuces –– it’s absolute best friend is the humble carrot.

Carrot flies happen to find the scent of the leek unsavory, keeping them at bay, while the carrot seems to have the same effect on flies that feast on onions. It also turns out that carrots and leeks seem to find their way into many of the same recipes.

Leeks are close relatives to onion and garlic, and tend to make its way into soups and stews. One 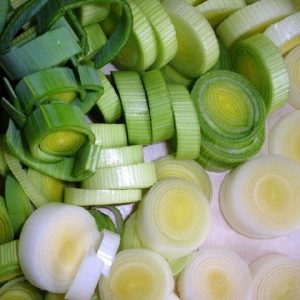 of the more common dishes is leek and potato soup. A time-tested classic, this soup is a hearty winter dish that warms both your body and your soul.

To cook with leeks, you’ll need to first clean them to get rid of any dirt or sand that may have gotten between the layers as it grew. To do this, chop off the dark green top, then the root. Next, you’ll want to cut the white stalk in half lengthwise. Take both halves and—under cool, running water—rinse between the layers. This should take care of any sand, but if you want to take an extra layer of precaution, submerge the layers in cold water and let dry in a colander.

Once you starting growing leeks, it will become a staple of your fall or spring garden. Their taste, versatility in the kitchen and beneficial characteristics in your garden will make it one of your favorite new vegetables to grow. So, if you’re in zone 7 and up, why don’t you make some space for leeks—preferably near your carrots!