Pssst:  There are only two important types.

Ok. OK. There are others, but only two big ones for gardeners—one tall perennial, and one short annual, both easy, easy, easy to grow!  You’ll want them both.  Here they are:

Number One. One of the most important plants for a beautiful garden is PHLOX.  And when you hear that word, most gardeners are talking about the Perennial kind, commonly called Tall Garden Phlox.  There are hundreds of varieties available, with new ones all the time. They grow about waist high.

Number Two.  But that’s only half the story.  Do you know Annual Phlox?  It’s a short (about 10 to 24”) Texas native wildflower that’s been hybridized from red, pink and white into a complete rainbow of colors.  Today, flower gardeners who plant the seed are rewarded with an absolutely stunning show of colorful blooms.  Even though they’re planted worldwide today, the annual phlox has a fascinating history that is All-American. Back in 1825, an early Scottish botanist named Thos. Drummond was collecting new plants from the “new world” to send back to Europe.  He ventured as far west as Texas and there discovered an incredible wild species of short (8 to 10”) annual phlox in bright beautiful colors, blanketing open fields.  So today, these now-famous annual phlox are called, you guessed it, “Drummond Phlox.”  They’re planted every spring worldwide.

He discovered them in their tiny native region…the small area of Texas that is now the location of the twin cities, Ft. Worth and Dallas. (If you visit there any April, you’ll see an unbelievable display of these famous wildflowers everywhere–on roadsides, in yards, up interstate embankments—Drummond Phlox, along with the bluebonnets, are still the wildflower glory of the world-famous Texas spring bloom.)

Meanwhile, check out the new colors of Drummond (or “Annual”) Phlox.  Just plant your seeds in early spring and stand back. They’re as easy to grow as marigolds.

The Tall Perennial Phlox. Most gardeners don’t need an introduction to these fantastic plants, the backbone of every perennial border coast to coast.  Like all perennials, there are the favorites, one being the spectacular snow white “David,” far and away the No. 1 variety today.  It grows taller than some, and blooms a bit later, extending your color for weeks. It’s also sweetly scented. Another top favorite is the bicolor pink called “Bright Eyes.”

It’s a little shorter than “David” but just as hardy, and gives you great color during early summer. 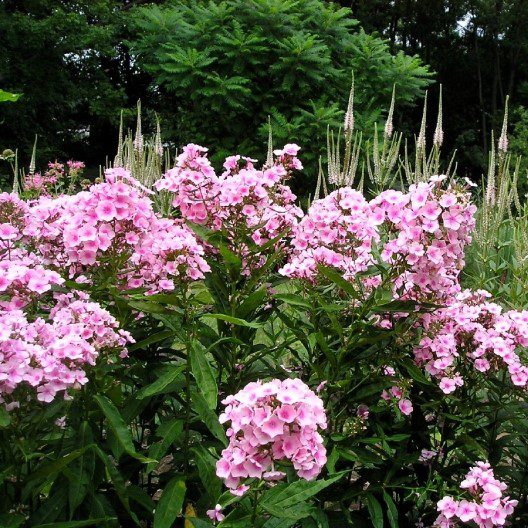 Tall garden phlox make great summer bouquets, too, with sweet fragrance and easy to arrange long stems.  Cut them when in bud, and you’ll enjoy them for weeks.